which one do u think is the best OS now! 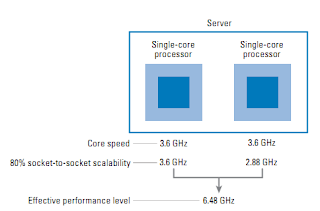 This is an example shown here.  In the environment, there are 2 cores each of 3.6GHz core speed, sharing  the same bus system.  The BUS structure is optimized to a level to achieve 80% of max performance while the other core delivers 100%.
If we increase the number of cores, the effective performance  will be relatively lesser than an architecture with lesser number of cores, though the overall performance increases.
Another example?? 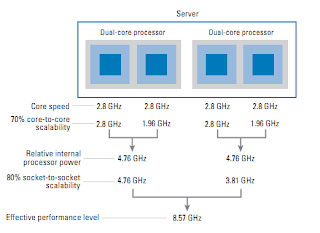 Consider a system with 4 cores. A Core 2 Duo processor. In this type of architecture 2 dual core processors are scaled together to give a 4 core based processor system. The dual cores a are designed in the fashion described earlier. Here dual core fabrication is just a part of the process. The dual cores achieved 80% SOSS, resulting in an 180% processing power compared to a single core. The 2 cores are embedded together in a single processor  architecture. Here the SOSS remains 80%  but the COCS is 70% for both the dual cores.  If the number of cores are increased under the same architecture, with each layer of scalability the efficiency will get relatively reduced. Standard Core2 Quad systems were built in an architecture similar to Core 2 Duo, but the Xeon Quad cores are designed in a more efficient way.
So this was the general architecture of multicore environment processors. Though one must be aware that, multi core is not all that makes the new generation processors so much efficient.
I will post, in the upcoming weeks, about the latest Core i series processors, 2nd generation intel processors and various technologies that help increase performance dramatically, e.g.  HTT, AVE, DFT, ITB etc.
Thank you for reading.
Posted by neeal at 5:45 PM